Of course there are exceptions;

The rabbit fancier – a member of a rabbit club, who regularly shows their rabbits and breeds according to strict guidelines and breed standards.

The homesteader – providing family with food. Not only is rabbit meat highly nutritious, their droppings make the most fantastic fertiliser!

The commercial farmer – controlled breeding of rabbits for slaughter. (Please don’t shoot me down in flames)

Right, so now onto the nitty-gritty!

I will cover everything from a rabbits genital organs, mating, palpation through to kindling. Most of the following are excerpts from a booklet I wrote in the mid 90’s, titled “The principles of raising rabbits”.

The genital organs of the buck are the same as in other mammals.  Since there is a link between testicle size and fertility, testicle size is a useful factor in selecting breeding buck. Shortly before puberty, at 3 to 4 months, the testicles descend into the scrotum. Both testes can be retracted into the abdominal cavity if excited. Males that retain their testicles beyond 12 weeks should be excluded from the breeding programme as this is an inherited trait. Sexing prior to that age can be carried out by noting the distance between the anus and the penis, and the anus and the vulva. In the case of the buck, the distance is greater. The genitals of the infant doe appear as an elongated slit and of the buck appear as a round “O”.

Pictures showing young buck (above) and doe below.

To sex a mature rabbit, place it on its back holding firmly around the shoulders with one hand and support the hips with the palm of the investigating hand. Hold the tail down with the thumb and apply gentle pressure in front of the genital organ with the forefinger. This should expose a slit for the vulva in the female or a slightly protruding penis in the male. 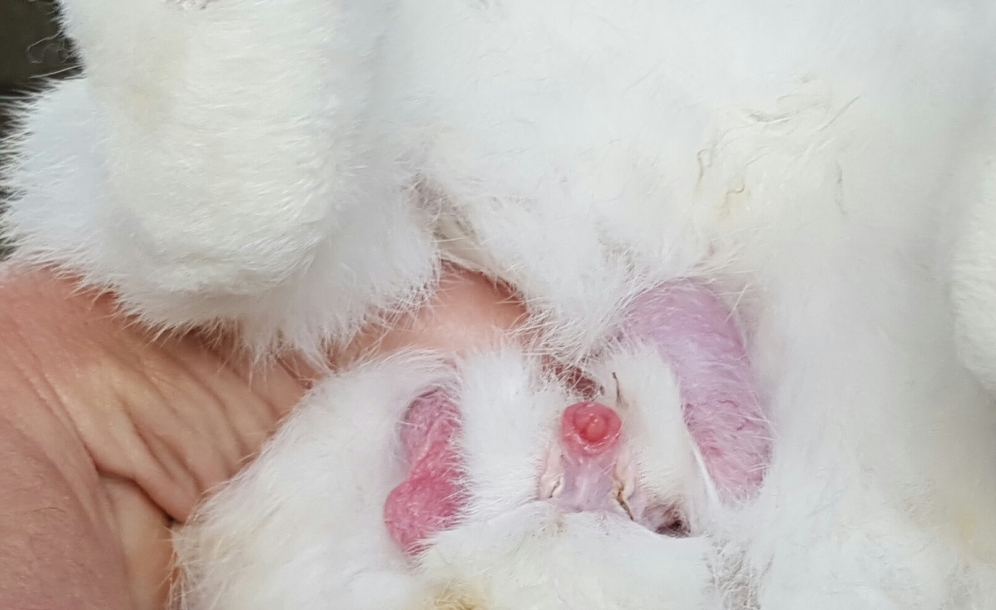 The doe can be mated for the first time at 6 months of age. I do however prefer to wait until 8 months for the larger breeds. When the doe is ready to be mated, her vulva will become swollen with a bright red/purple colouring. The doe should be taken to the bucks cage and not vice versa. The reason being that the doe is very territorial. After a bit of running around, the doe will raise her hindquarters, allowing insertion of the penis. The sperm is followed by a jelly like plug. When the mating is completed the buck will give a cry and fall over backwards or sideways.

Some breeders, including myself, feel that increased conception rate and litter size can be achieved by allowing 2 – 3 services at the time of mating. This maximally stimulates the doe to ovulate and makes use of the second ejaculation which normally contains more sperm. I currently have a 99% conception rate using this method.

The doe has two uteri  which do not join to form a common uterus but each has its own cervix, opening into a common vagina. Five to ten ova containing follicles develop on each ovary and remain active, producing oestrogen for 12 – 14 days. After this time, if ovulation has not occurred, these follicles will generate with a corresponding drop in oestrogen resulting in a refusal to mate. After about 4 days a new wave of follicles will begin to produce oestrogen and the doe will again become receptive to mating. Thus the doe has 16 – 18 day cycle with about 12 – 14 days that she refuses to mate.

Ovulation in the doe occurs about 10 hours after being subjected to some external stimulus such as copulation, petting or being mounted by other does. If insemination does not accompany this ovulation, pseudo pregnancy may result. The doe behaves as if she is pregnant and by day 17 of the pseudo pregnancy she can be remated.

If your conception rate is running on an average of 70%, you can choose to palpate your does so that you can run at the maximum possible production levels. This is only really necessary if you are a commercial breeder.

Palpation is done 10 – 14 days after mating. Place the doe on a sturdy table or back her into the corner of her hutch. Hold her by the skin over her shoulders and place the other hand under her body, just in front of the pelvis. Place your forefinger and thumb on opposite sides of the abdominal cavity. Raise her hindquarters until just the tips of her back feet are touching the floor. Wait for her to relax her abdominal muscles and then gently feel for the embryos which will have an aproximate diameter of 12mm at 9 days and 22mm at 13 days of pregnancy. At 14 days the marble-sized foetus are easy to feel and the likelihood of damage from palpating minimal.

Do not palpate after 18 days of pregnancy as you may damage the placental attachment to the uterine wall. If no foeti are present, remate the doe. Faecal pellets will not be mistaken for embryos if you remember that the uterus lies on the bottom of the abdominal cavity whereas the large intestine is above, near the spine.

Kindling                                                       Gestation is between 28 – 32 days. The doe should be provided with a nest box 28 days after mating. The bedding in the box should be something soft, absorbent and pliable, such as wood shavings or hay. The doe must be able to mix it with the fur that she pulls out to make a nest. If the doe has not pulled out any fur and she has already kindled, you can gently pull some out from her chest. This will normally start her making her own nest. Fur can also be saved from other rabbits when grooming. Does usually kindle at night and the kits are born hairless, blind and deaf. The doe may occasionally injure a kit when cleaning it, this often leads to the doe eating most of the kit.

Litter size varies from 1 – 24, with an average of 6 – 10 in the large breeds. The doe has only 8 teats, so it is beneficial to leave only 8 kits with her and foster the rest onto another mother if available. The kits stay in the nest for the first 2 – 3 weeks.

After kindling the doe eats the placenta. When she is finished in the nest the kits should be inspected and any soiled materials should be removed. A rabbits milk is very rich, providing the nutrients needed for rapid growth. A properly fed doe can be expected to produce daily 30g of milk per kg of body weight. Thus a 5 kg rabbit will produce about 150g of milk per day!

Since lactation is a very demanding activity, additional feed should be made available. The doe spends 3 – 5 minutes twice a day feeding her young. This doesn’t give the kits much time to find a teat and drink. A nest box that is properly designed with the correct bedding makes it easier for the kits to feed. Young rabbits start eating solid food when they are 3 weeks old, although the will start eating solids as early as 2 weeks if the milk supply has been low. Kits can be weaned from their mothers at 4 weeks old. Make sure that when weaning kits that they are protected from draughts and bad weather, they can be very prone to  diseases at this stage. (More about disease in another post)

My advice to anyone that is interested in breeding rabbits (for the correct reasons of course), is go slowly, buy in some young rabbits, bond with them, watch and learn from them, research your particular breed.

Rabbits are not “easy money”, it takes a lot of hard work and diligence to eek a living out of rabbit farming. They are very intelligent, sensitive, sentient little beings and must be treated with utmost love and respect!